Gigantopithecus was an enormous pre-historic ape. In fact, it’s the largest primate anywhere in the fossil record! Standing anywhere from nine to twelve feet tall, gigantopithecus was a force to be reckoned with. Whenever you see someone wearing a Bigfoot t shirt, or perhaps Bigfoot socks, you’re looking at a creature that may very well have been inspired by gigantopithecus.

Gigantopithecus is known from a few fossil remains. We have teeth and mandibles from the creature. Although we only have the teeth and part of the skull, advances in biology allow scientists to infer a great deal about what the creature must have been like. Techniques often involve taking similar, closely-related creatures, such as orangutans in the case of gigantopithecus, and inferring the proportions of the extinct animal based on what we know of modern-day relatives of that animal. 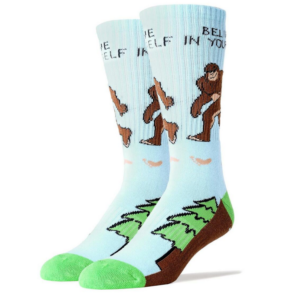 Gigantopithecus would stand between nine and twelve feet tall if it were similar to a modern-day orangutan, which is its closest relative. Fossil evidence suggests a great degree of dimorphism in the species: males were larger than females, by far. The teeth that we have suggest that gigantopithecus ate plant matter primarily, because it has many molars for chewing plants. Also, because the upper canines (the fangs) do not protrude very far, it is likely that gigantopithecus did not intimidate others of its species by displaying its teeth. This is in contrast to animals like gorillas, which can display their long fangs in order to frighten other gorillas.

This leaves us with an interesting finding: since the males were larger than the females, we know that there was a lot of fighting between males, possibly over mates. Generally, in species where the males are bigger and stronger by far, the males compete with one another a lot, and that’s the evolutionary drive behind them becoming bigger than the females. Second, we know that they did not intimidate one another by showing their teeth. This is interesting because it suggests that gigantopithecus did, indeed, compete with others of its own kind, but did not do so using its teeth. This means that it probably had some other threat display. It could, for example, have flared out its shoulders to look bigger, stamped the ground, thrown grass, or used other primate threat poses.

Some people have identified gigantopithecus as bigfoot himself! Most cryptozoologists are amateurs or people working outside of the academy. However, there was a professional, tenured anthropologist who believed in bigfoot and thought that gigantopithecus might be bigfoot. His name was Grover Krantz. Many people in his field thought that he was a crackpot, and a lot of his work was denied by various scholarly journals by other academics who thought it was just crankery. However, Krantz himself never apologized for his belief in bigfoot and continuously tried to prove its existence. Krantz theorized that gigantopithecus (bigfoot) would have crossed the Bering Land Bridge when it still existed.

Most astounding of all, Krantz was, at one point, a skeptic! He began by thinking that bigfoot was probably not real, and gave the creature a 10% chance of existing. Later on, he became convinced that Sasquatch was actually real.