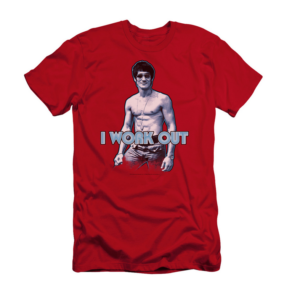 Bruce Lee is renowned as a martial artist. But one thing that a lot of people don’t know is how admired he is by professional bodybuilders. Despite being small and thin, weighing in at only about 140lbs for most of his life, Bruce Lee is well-known to bodybuilders as one of the most defined physiques to have ever been displayed by a celebrity. Joe Weider, the founder of the Mr. Olympia bodybuilding competition, described Bruce Lee as having “The most defined body I’ve ever seen!” Additionally, many professional bodybuilders have cited Bruce Lee as an influence. There’s a reason that his legacy extends beyond kung fu movies, and there’s a reason that people still wear Bruce Lee t shirts today.

Bruce Lee was known for emphasizing physical fitness. He thought that most martial artists were too focused on developing technique. While he did value the technical side of martial arts, Lee felt that a martial artist, to be roundly effective, should focus on training their bodies as much as their technique. He was known for being extraordinarily fit and even had several exercise machines designed and built to his own custom specifications. He was a very accomplished athlete and had very specific training goals that could only be met by custom machines.

While the film Enter The Dragon was being created, Bruce Lee was choreographing some fight scenes. He did this live on set. The director’s wife, Ann Clouse, was observing Lee and admiring his physique (he was shirtless at the time). Eventually, she approached him between takes and asked to feel his bicep. When he allowed her to do so, she exclaimed, “It’s like feeling warm marble!”

Bruce Lee was not, however, a person with a bodybuilding ethic. While bodybuilders admired him greatly, bodybuilders are people who build muscle primarily for show. Bruce Lee didn’t build muscle for show. Instead, he built muscle for function. His goals were speed, strength, flexibility, and the ability to fight. He wasn’t interested in just looking good. In fact, he wasn’t interested in looks at all!

Take a moment to appreciate that. Bruce Lee’s physique was basically a byproduct of his training process. He was first and foremost an athlete who was interested in fitness. And yet, bodybuilders, whose entire careers revolve around making their bodies look good, are impressed with his appearance. That means that Lee’s dedication to athleticism was so great that he could build a bodybuilder-esque physique from sheer athleticism. Bodybuilders build themselves to look good, but Bruce Lee looked better than any bodybuilder just through athletic training. Bruce Lee was a freak athlete and one of the most physically gifted people to ever live.