One of the strangest supervillains and comics, not to mention one of the most unique entries in Superman’s rogues gallery. Many superheroes have a “doppelganger” sort of villain with whom they contend. Batman has Catwoman and Spiderman has Venom. Superman’s doppelganger nails the exact purpose of a doppelganger villain, which is to have a villain who possesses many of the hero’s strengths while simultaneously embodying everything he is not. Catwoman has Batman’s stealth, but is fickle versus Batman’s rationality. Venom has Spiderman’s powers but is brutish and destructive versus Spiderman’s soft-heartedness and Peter Parker’s modesty. Bizarro has many of the same powers as Superman, but is a hopeless troglodyte who runs directly counter to the high ideals that Superman holds. Bizarro is a villain frequently featured on Superman t shirts. 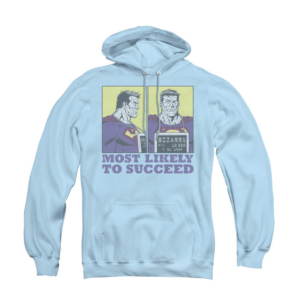 Bizarro’s backstory changes, like all comic book characters, but there are some consistent themes. In most of the stories, he is the result of some kind of duplication experiment, such as a duplication ray. The general theme is that, whatever experiment accidentally creates him, Bizarro is an imperfect copy of Superman. He’s never quite the exact copy he’s supposed to be. This is why, whenever you see Bizarro, he seems to be stupid or speak in broken sentences. He is destructive, but in an oblivious sort of way. Very often, he seems to think that he is Superman. He doesn’t quite understand morality, either.

And that’s another big part of his personality. Bizarro, in most incarnations, is not exactly evil. It’s more that he is immoral, because he does not understand the difference between right and wrong. In a way, Bizarro is, in fact, quite innocent. This is another part of his opposition to Superman: where Superman has a strong sense of justice and stands for certain principles, of which he is keenly aware, Bizarro has no principles at all. Bizarro doesn’t even have evil principles. He’s just amoral. He’s a bull in a China shop, not only in the sense of breaking things, but in the sense that neither Bizarro nor the bull know what they’re doing or are fully aware that they are breaking things.

Very often, especially in more recent treatments, Bizarro is dealt with relatively more gently than other villains. Superman often stops or imprisons him somehow without hurting him. Also, Bizarro frequently escapes to live on his own somewhere where nobody will bother him. In one of the earlier adaptations of his character, the duplicator ray the creates Bizarro is also used on Lois Lane. This creates a Bizarro Lois, who is immediately attracted to Bizarro. The two escape to make their own life elsewhere. This is in keeping with the strange innocence of Bizarro’s character. Because he does not know right from wrong, he implicitly does not deserve punishment or “justice” of the same kind that other villains do. Instead, Bizarro often finds himself being released or isolated in a way that protects him from the world as much as it protects the world from him.