Who doesn’t love Jim Carrey? Well beloved for decades and one of the most famous and iconic actors of the past 50 years, Jim Carrey was the face of American comic cinema throughout the 90s and 2000s. A master of physical comedy and improvisation, Carrey didn’t just play roles; he was the lynch pin and central element of nearly every movie he starred in. Having been a fixture of American comedy for some time, it’s no surprise that you still see him on the occasional Ace Ventura movie t shirt. Here’s a list of some of his best films: 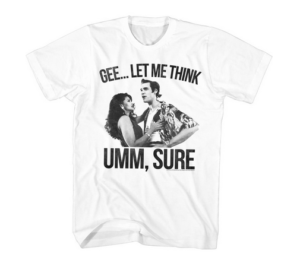 5 Ace Ventura
Ace Ventura was one of Carrey’s earlier films, and it shows. There is a general trend in his movies where they become less and less wacky and goofy and more introspective and thoughtful as time goes by. Belonging to his earlier period, Ace Ventura gives Carrey a lot of room to improvise and do silly impressions, and is overall typical of 90s comedy in its lightheartedness and farcical nature.

4 Dumb and Dumber
Much like Ace Ventura, Dumb And Dumber is a typical 90s comedy. We see Carrey taking up what came to be his prototypical role in the 90s: a happy go lucky dolt whose entire existence consists of misadventures. While Dumb And Dumber is not exactly a critic’s idea of a cinematic masterpiece, it’s still an endlessly entertaining movie decades later.

3 Liar Liar
One can see Liar Liar as the beginning of the trend where Jim Carrey movies stopped being pure silliness and began to trend toward thoughtfulness and high-concept film. Liar Liar is a movie about a little boy that makes a wish that, for one day, his dad can’t lie. This quickly becomes a problem, because dad is a lawyer and needs to lie constantly to keep his job. What follows is hilarious, but also a sad commentary on how dishonest people are every day. This comes home when Carrey’s character says the line: “Adults need to lie.”

2 The Grinch
The Grinch holds a special place on this list because it’s a remake of an animated favorite. Jim Carrey’s Grinch is just as cantankerous and curmudgeonly as the old cartoon Grinch. However, Carrey brings his own unique twist to the character. His unique brand of physical comedy brings a new dimension to an old favorite. Like Liar Liar, The Grinch also show’s Carrey’s trend toward more thoughtful film making and acting. The message of the original Grinch cartoon carries through in his newer, “inspirational” style.’

1 Bruce Almighty
Bruce Almighty was Jim Carrey’s highest-grossing film and might just have been his best. Released in 2003, it grossed $485 million. It is also the movie that takes place at the apex of Carrey’s high concept phase. In it, God, played by Morgan Freeman, offers Carrey’s character, Bruce, a chance to be God for a while. The film has some interesting ideas about religion and morality, and questions whether it would be a good thing if everybody ultimately just got whatever they wanted. Of all of his movies, this is perhaps the best one.