Was Twisted Sister A Metal Band?

Was Twisted Sister A Metal Band?

Twisted Sister is primarily known as a hair band, or hair-metal. It’s not true metal, but a kind of pop rock that was popular during the 1980s. However, they did have a few songs that were closer to true metal. While Twisted Sister primarily wrote songs that were poppy and anthemic, similar to Poison or Motley Crue, they did write a few songs that were less teased hair and leotards and more leather and spikes, more in the vein of Iron Maiden or Judas Priest than Whitesnake of Bon Jovi. So what songs were those, and what made them sound like metal? 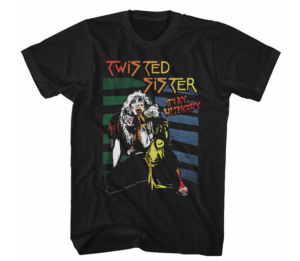 The first of their more metal tracks is Burn In Hell. The very title already sounds like a legitimate metal song rather than a hair metal bonanza, and that’s what they delivered on this track. Covered later on by no less a legendary black metal band than Dimmu Borgir, Burn In Hell begins with slow, ominous minor-key power chord riffing. The singer stays away from the higher end of his range and sings in a rough baritone: “Welcome to the abandoned lands/Come on in child, take my hand”. It’s the sort of singing that frequently accompanies heavier tracks in 80s metal. When he finally unleashes a high-pitched scream, the track kicks into overdrive, with the tempo increasing and the intensity ramping up. The chorus, a simple refrain of “You’re gonna burn in hell” serves to drive home the grim nature of the track. Interestingly, when viewed closely, the lyrics are not about Satan and death and evil at all. Rather, they’re a warning for the listener to change their ways before they “burn in hell”. Whether this is a reference to a literal Christian afterlife punishment, or a simple warning about the consequences of one’s actions, is anybody’s guess.

The second heavy track from Twisted Sister, which is the reason why so many metalheads still occasionally wear Twisted Sister t shirts, is Under The Blade. Under The Blade begins with fast palm mutes in a manner reminiscent of Judas Priest. The singer begins menacingly, saying, “A glint of steel, a flash of light/You know you’re not going home tonight”. At the end of the first verse, when he finally screams the word “Blade!” near the upper end of his range, the guitars go from fast low palm mutes to being ripped open by power chords higher on the fretboard. This is the sort of thing that Rob Halford would have had fun with. Amusingly, this song was highlighted by Tipper Gore as a reason to censor music and put parental advisory stickers on CDs, because she assumed that it was about lascivious, deviant practices. This is very funny, because Tipper Gore seems to have been projecting: in reality, Under The Blade is just about getting oral surgery, which is a very frightening experience, as anyone who has had their wisdom teeth out knows full well. Although it’s good that we all now know what Tipper Gore was doing on the weekends, if you get my drift.