What Does The Fallout Series Do For Us?

What Does The Fallout Series Do For Us?

The Fallout games are a huge cash cow for Bethesda. For example, Fallout: New Vegas raked in more than three hundred million dollars in the first month after its release. Pause for a moment to reflect on what a tremendous sum of money that is. There are blockbuster films that never touch anywhere near that amount of money. How is it that this series has made Bethesda so much cash? What is it about Fallout that is so compelling that people just have to have it? Granted, it’s not the Elder Scrolls or the fame of Skyrim, but there’s definitely something there that people want. So what is it? What’s with all the Fallout video game shirts? 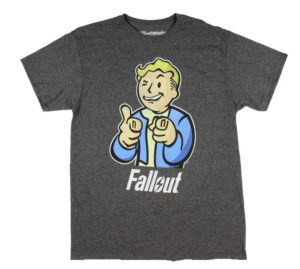 Secondly, it provides Bethesda with a series that is somewhat less cartoonish than their other games. Skyrim is an enormously popular game, but the voice acting, writing, and plot are all on the same level as you’d see in a Disney film, or perhaps slightly below that. The Fallout games just feel somehow more serious. Part of it is the superior quality of the voice acting and dialogue, as well as the writing. But another big part of it is the setting. While fantasy can be done well, it’s something that must be “sold” in order to be convincing. If we are going to take magical dragons seriously, then we have to be persuaded to do so. Post-apocalyptic settings are just easier to take seriously and lend themselves more to suspension of disbelief.

Another big issue with Fallout is the consistency of the series, which is an element that is missing from the Elder Scrolls. The Elder Scrolls was never a very consistent series. There was Arena, which was more of a beta or prototype than a series-launching game. Then we had Daggerfall, which is the first game that felt a bit like the Elder Scrolls but was still more of a historical achievement than a game that people still want to play today. The first really great ES was Morrowind, which was very different from Daggerfall. Oblivion felt like a more canned Morrowind with slightly better graphics, and Skyrim was just a straight-up action game.

Fallout, by contrast, is a very consistent series. That’s not to say that all the games are, or even feel, the same. However, they’re all clearly in the same genre and proceed along the same general lines. This is in stark contrast to the Elder Scrolls, which feel like a weird experiment with each new game. Fallout, by contrast, is a series where the gamer knows roughly what they’re going to get.