Four Pokemon You Can Use On Mewtwo in Red/Blue 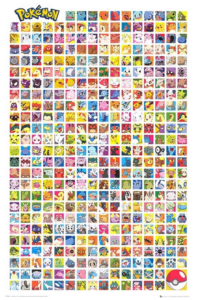 We all remember the old Pokemon games, Red and Blue. Later on, long before Gold and Silver shook things up with many new species, Yellow added to the fun by taking the ordinary model and adding many new features, such as a Pikachu that would follow you around. Although the balancing wasn’t perfect, the original Pokemon games were a unique experience and for many of us, were our first introduction to Nintendo. The Pokemon games are the reason so many people still wear Nintendo t shirts, or at least, one of the reasons. We all had a blast playing Pokemon and putting Pokemon posters on our walls..

But then there’s that little rascal, Mewtwo! It was obviously a lot of fun to play Mewtwo when you’re the one knocking enemy Pokemon around with zero effort. But suddenly, when you run into another player who is kicking your butt with their Mewtwo, it’s not fun anymore. The only real option is to pull out your own Mewtwo and go head-to-head, and that just gets boring after a while. So what are some non-Mewtwo Pokemon you can use to knock that sucker out? Is there any way to beat him without hauling out a long list of your own legendaries, or is he just invincible?

The first thing you could try is Parasect. I know what you’re thinking: “Parasect? That weak bug Pokemon? How in the world is he going to help me against Mewtwo?” Well, there is a specific moveset that you have to use. That moveset is as follows: substitute, spore, sword dance, mega drain. Start off by using spore to put Mewtwo to sleep. Then throw out a substitute and begin using sword dance to raise your attack. Finally, spam mega drain until big M2 bites the dust.  The attack boost from sword dance, plus the bug-type bonus against psychics, ensures that mega drain will deal huge damage to Mewtwo. Even better, if Mewtwo wakes up and uses psychic to kill the substitute, you can just put him back to sleep with spore, which has a very high accuracy. On top of that, mega drain restores health to your parasect, so you can easily toss out another substitute once Mewtwo is sleeping again. If you can pull this off, there is nothing Mewtwo can do!The second thing you could try is Snorlax. The Snorlax moveset you want is amnesia, rest, headbutt, and selfdestruct. Simply use amnesia three times to begin with. This raises your special greatly so that Mewtwo’s psychic can’t knock you down. You can even rest and leave Snorlax out there for three rounds. His HP is so high he can weather three rounds of an angry Mewtwo, provided he has three amnesias under his belt. Then attack repeatedly with headbutt. Headbutt has the side effect of causing Mewtwo to flinch, which can open him up for another headbutt. Once Mewtwo’s hp is low enough, use selfdestruct for the KO.

Two final options are Dugtrio and Electrode. With Electrode, attack with thunderwave to paralyze Mewtwo, explosion to take a chunk from his HP, and then send out Snorlax. With Dugtrio, just use fissure repeatedly and hope for that one-hit KO.

OK, I know.  This movie is done and past.  But the fact is I saw it about a week ago and enjoyed it.  I am running short on time tonight and will crank out my thoughts on this rather than rush through more dating advice and come out with crap.

(Expendable poster, by the way, courtesy of the new poster catalog)

First of all, I enjoyed it.  It was a good action filled two hours.  The grizzled old actors all looked cool, in a washed up sort of way.  I actually think Dolph Lundgren looks cooler and way more menacing than he ever has before.  I’ve also become a fan of Mickey Roarke recently as well.

Story synapses-a team of aging mercenaries with matching crow/skull tattoos called the Expendables go around the world pretending to be conservationists until they kill and blow up everything in sight.  Dolph Lundgren is booted out for being too eager to kill (ironic, given the body count at the end of the movie) and later resurfaces to make things hard for them.  They get hired by some guy (who is suspected of being a CIA agent) to kill some dictator on some small Latin island.  For some reason the CIA actually wants to kill a rogue agent of theirs who is running around with the dictator, but I am not sure what was going on there.  The contact is a super hot Latin girl who later turns out to be the daughter of the dictator who inexplicably got tired living a life of safety and luxury and decides the thing to do is help some foreigners to kill her father.  She also seems to be bizarrely attracted to Sylvester Stallone, who is close to three times her age, so I think it fair to say she has some daddy issues.

That’s pretty much it.  Stuff gets blown up, guys get killed, the girl gets water boarded, and somehow the expendables kill most of the 200 man army the dictator has recruited from an island with a population of 5000, wiping out the majority of able bodied men, most of whom seemed to be relatively innocent peasants the main guy recruited to keep himself supplied with cigars.  There is no discussion of the economic or social ramifications of the murder of 4% of a small island population, so I guess the island was well equipped with healthy young men and emotional equipped to deal with the death of 1 in 25 people.

Spoiler alerts incoming. The one real issue I had was for a team called the Expendables, the didn’t actually expend much, or at all for that matter.  Somehow they all managed to survive the million billion bullets fired at them, as well as the assorted hand to hand combats with a guy who looked like he could crush them all with one bicep behind his back.  I don’t expect true realism in a movie like this, but it seems like at some point one of the team could step on a mine or something to make the reality of the situation seem more dramatic.

Overall, if you are looking for good acting, character development, and a story written above a third grade level, go see Inception on Blue Ray.  If you want to suspend your disbelief (as well as most of your higher brain functions) and see a bunch of guys get shot or blown up, than this movie will not disappoint.  Also, there is one decent scene with Jason Stratham that I liked a lot.

I have figured out my new movie rating system, but don’t have time to finish the research and present it tonight.  Maybe next week.  From a purely movie reviewing perspective I would have to give this movie a 1 out of 10.  From a brainless mind candy point of view I could fairly give it a 4.5.  This movie is perfect if you are home sick, incredibly drunk, hung over, babysitting someone in a coma, or trying to piss off your girlfriend and want to stream something that does not require actual attention paid to it on NetFlix.