Dave and Dave: Robuts, Necromancy, and why we need to keep robots out of RadioShack

More of Dave and I nerd texting. 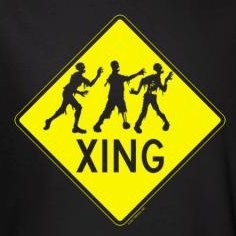 Dave I: 4 although I always liked the Heaven is full one.

DC: I would classify that under 2, spiritual

DC: That would be magical I think.

DI: What about nanobots?

DC: Nanobots would be 1, alien invasion.

DI: Plan Nine from Outer Space had aliens raising the dead to conquer the planet.

DC: I prefer as little detail as possible.  The press would be eaten first and how would we know?  Why would you care except that it never ends.

DI: Which would you prefer for your plane to conquer the planet? Zombies, human henchmen, or robots?

DI: But chaos theory states that all robots will eventually rise up to destroy the human masters.

DC: I’ll get my brain inserted into a robut body.

DI: But then whose side will you be on in the inevitable robot uprising?

DC: I’ll build them all with 7 year lithium batteries.  They will drop dead.

DC: I suppose or put an expiration date on their mainseal so they fall apart.

DI: Yeah.  With the batteries they may be smart enough to find a RadioShack.

DC: I want Cylon warriors with fembots as my personal guard.

DI: Old cylons or new ones?

(zombie image courtesy of our collection of zombie t-shirts.  Toaster from BSG shirts)

Some thoughts on the TV show Z Nation

So I’m done with Star Trek TOS and enjoyed every minute of it.  I think I might do the same thing with DS9 but want to take a break and talk about other stuff that has caught my eye on Netflix.  First up: walking Dead Knock off Z Nation.

Zombie apocalypse happens (thank God.  Image courtesy of our huge collection of zombie t-shirts) and one guy proves immune to the disease.  Of course he was a prisoner forced to take the anti virus and has what might be generously considered a bad attitude and the lab they need to get him to is across the country.  So the journey begins.

My first take on this show is it is alternatively one of the best zombie shows out there or the stupidest.  Very hard core with things the Walking Dead wouldn’t touch like zombie children, zombie babies, cannibalism, and other stuff more than a little past PG-13.  However once you get into the hard core nature of the show they trot out some dumb Zombi3-esque cliche and make the show look really stupid.  Sorry but a zombie baby should present about as much danger to a full grown man as a football if you know what I mean.

Anyway I’m crunched for time but will parse out more thoughts on this show and a couple others I have been watching.  Check back soon.

This is one of those special reviews for me where I, the cinema equivalent of a six year old prescribing sugar pills to her teddy bear while playing doctor, get to tell so called professional filmmakers who have dedicated their lives to perfecting their art how to make films.  The funny thing is the director, Rupert Wyatt, actually directed Rise of the Planet of the Apes (a personal favorite).

You don’t have to be a genius to ken that I found issues with the Gambler.  First off the entire movie serves as a vehicle for every single character to deliver long, pithy, analogy ridden, repetitive, boring monologs when telling their life story, discussing philosophy, or answering the question would you like fries with that?  Each character in turn is either rambling on or playing the sounding board for the ramblings of someone else.  The 111 run time could have been about 45 minutes if the writers had ever studied their Shakespeare (“Brevity is the Soul of Wit”).

The other Moviemaking 101 lesson that these guys seem to forgotten is the idea that at least one of the characters in a film needs to be remotely likeable by the audience.  The main character played by Marky Mark I wanted to see die a horrible lingering death and he and his love interest had a lot of chemistry in that I wished they had both been dropped into a vat of acid.

The closest thing to a likable character was Jonathon Goodman but since he was only on screen for about 20 minutes (and mostly naked for 18 of those 20 minutes.  Weird.  I just found out he played Mr. Prenderghast in ParaNorman.  This poster I pulled from the zombie t-shirts) there is no way he could have saved this film.

Dumb and Dumber To Review part 2

That’s pretty much the humor of this film in a nutshell.  The jokes are there and they are all technically funny but for the most part it’s all pointing to jokes that were done way better back in 1994 with better timing and more pizzazz.  Most of the best new humor came from the new straight man Travis (Rob Riggle).  There were a few funny moments but for the most part you sit there acknowledging the humor rather than laughing at it.

That’s not to say it wasn’t funny or worthwhile.  If you loved the first Dumb and Dumber odds are you will enjoy a lot of the call backs.  If fart humor makes you laugh there are a couple moments that are really great (I admit I have a certain penchant to laugh hysterically at a good fart joke.  So I’m lowbrow.  Sue me.  In college my best friend had a maneuver he used to call crop dusting.  I’ll just say it was hilarious and high end outdoor restaurants were his favorite target).  However I just felt it was a lot of the same Lloyd and Harry bumbling around the screen without being surprising or amazing like last time.

I’ll also say too much of the comic relief.  What made the first movie really work was the fact that Lloyd and Harry were so stupid dealing with people of at least normal intelligence.  What does not add to that humor is the addition of another character just as stupid but who also happens to be a super hot chick in her underwear.  Floyd and Harry were dumb, looked dumb, and had dumb haircuts.

Rachel Melvin is super hot and in spite of what guys seem to want there is something really off putting about super hot super dumb girls (on the other hand she starred in something called Zombeavers this year so that makes her my favorite new breakout star.  Image from one of the zombie t-shirts in my personal collection).

and it was great.  I had no idea we would be so busy.  My feet are killing me, but we sold a lot of shirts.  Tomorrow is supposed to be even busier.  I need to go in early and unpack the rest of an order that arrived last night.  The new baby onsies were a big hit, as was this girls shirt from the zombie t-shirt section.

I am super tired, but I had a lot of fun.  Lots if interesting people to talk to, and I saw some amazing guys in great costumes.  A bunch of people in great steam punk outfits, a really hot chick dressed as Princess Leia (white gown, not metal bikini, but slit way up high), two guys in great BSG uniforms, two guys in great Starship Trooper uniforms, and someone is a weird furry animal costume of some kind.  Not sure what that was about, but I have my suspicions.

Anyway, I am beat and need to get some sleep.  I am sure I will see even more tomorrow.

Gearing up for WonderCon

Set up for WonderCon starts tomorrow, and if there’s one thing I have learned after many, many shows it’s that the early bird gets the worm/power outlet/hand truck/better space/free donut.  Therefore I am dedicating tonight (after a quick Warhammer game) to packing up my t shirts and loading up the car.  Most likely we are talking about a couple trips, but it should go pretty smoothly.  The worst part is tying my gridwall to the roof of my car.  I always feel incredibly white trash doing that.

I have a feeling that zombie t-shirts are going to be a big hit at this show, and have stocked up accordingly.  Also I am doing that Zombie Prom Saturday night and want to make sure I have plenty of zombie shirts for that.  Not sure how that is going to go, but could be fun.

If any of you are going to WonderCon please stop by and say hi.  Also, if any of you watched V let me know how it was.  I was going to go to a friends house to watch it but that fell apart.  Talk to you soon.