Dave and Dave: how to kill the Six Million Dollar Man 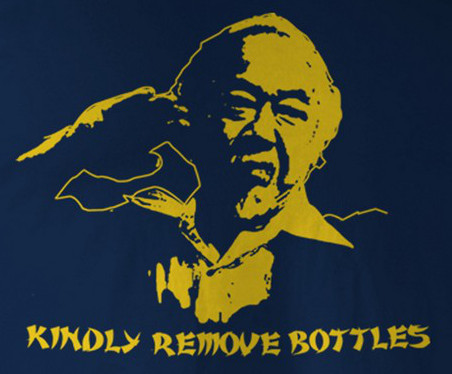 Dave I: Mr. Miyagi vs Splinter.

Dave C: Good one!  Splinter I suppose but I like Miyagi better. (image comes from a great Karate Kid t shirt)

DI: As a Skaven player I have to support the rats.

DC: Splinter uses weapons so he gets an edge.  Steve Austin vs the T100 unarmed.

DC: He can pop a tennis ball with his hand.  Ghostbusters vs Christine.

DI: With or without the ECTO-1?

DI: Ghostbusters but it would be close.

DI: They’d probably have to get a dump truck sized ghost trap.

DI: Is there a way they could both die?

DC: Lol sure but who falls first?

DI: Legolas is faster with more combat experience.  Pan can fly.  I’d have to go with Legolas.

DC: I’d root for Peter.  Lobo vs Godzilla.  No chopper.

DI: Lobo is effectively immortal.  Godzilla would eat him and Lobo would claw his way out.

DC: I see him butchering Godzilla steak by steak.

DI: With or without Brock Sampson?

DC: No, but they get their labs.

Some thoughts on the new Star Wars trailer Part 1

So I watched the new trailer a few times today and I think I need to write out my feelings to really understand them.  I’m sure you, my beloved readers, will appreciate this insight into my thought process.

Casting my mind down memory lane I remember how it was to see the trailer for the Phantom Menace.  I, like most Star Wars fans, was unbelievably excited.  “OMG a new Star Wars!  I’m gonna start waiting on line now!”  Of course there were certain signs that in retrospect I should have seen for the dead mine canaries they were.

Mainly WTF was up with the title and who is this dopey kid looking like the worst child actor in the history of child actors?  (Ralph Macchio image from the Karate Kid t shirt collection)  However my natural enthusiasm helped me turn a blind eye to the danger like a heroin junkie looking at a used needle.

Then I saw the film and it was like someone had set my hair on fire and punched me in the balls for 136 minutes.  I couldn’t believe how awful it was and how far off the track of what makes Star Wars great it had gone.  Stunningly bad, and almost bad enough to make me question my love of some of the original three (most specifically Return of the Jedi).

That attitude of “You Suck if You Never Heard of the Character We Just Made Up” marketing carries through to the film and is one of the parts the movie kind of falls into the laughable zone.  Every character in the film more or less soiled themselves every time the name John Wick was mentioned and it took like half an hour of film time before we were given a clue as to why he was being treated with the same fear and dread as as Voldemort with the One Ring.  I’m sure having everyone look like their mother found their porn collection (my own personal terror) whenever John showed up or was mentioned in passing sounded a lot more ominous on the script or even in shooting but on screen it just looked stupid.  The really bad ass hitmen are the guys you never heard of.

The other issue I had was John’s motivation.  He basically goes on a mass shooting spree killing and shoots dozens of armed goons and risks his life because some kid stole his car and killed his dog.  Granted the car was super cool (vintage ’69 Mustang) and the dog was super, duper, uber cute but still it seems like a lot, especially when he could have probably called the kid’s father and gotten his car back and a chance to beat on the guy pretty heavily.

For all that the film was beautifully violent and extremely well shot.

Keanu Reeves knows how to film fight scenes (image actually comes from the Karate Kid t shirt category) and the director must have had lunch with a fight choreographer because they did not fall back on the flicker vertigo inducing quick cut action sequencing most of Hollywood is falling back on to cover the fact that modern action heroes these days can not only not act but also can’t fight.  They seemed to embrace their R rating (although no nudity in spite of ample opportunity).  None of it was grossly over the top but all super fun, and John Wick is an interesting enough character to draw you in and root for his success.  Also the Mustang was not the only great vintage muscle car and I appreciate cars.