AC/DC was one of the premier rock bands of the 1970s and remains one of the most well-known acts in all of classic rock. Even people who don’t like the relatively mild and light classic rock sound can still get into AC/DC. Priori to AC/DC, a lot of the so-called hard rock outfits, such as Steppenwolf, were tame by today’s standards. If you don’t believe me, turn on Born To Be Wild by Steppenwolf sometime. Yeah, it’s fun, it’s catchy, its certainly sounds a little wild… But it’s not hard. It doesn’t aggressively grab your head the way you expect it to. Hard rock just wasn’t there yet when Steppenwolf made their music. 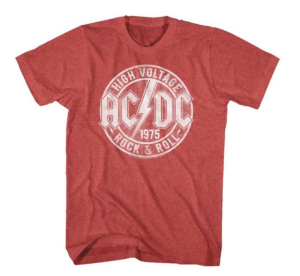 Now throw on Dirty Deeds Done Dirt Cheap by AC/DC. Not only does it aggressively grab your head, it’ll stomp on your face, too, and possibly yank your ear a little. Bon Scott’s raspy voice and persistent vocal fry, his borderline deranged delivery, along with Angus Young’s Gibson SG screaming through a set of Marshall stacks, makes it clear what you’re listening to.

That’s what AC/DC was. It wouldn’t be until Black Sabbath found their metal voice on Master of Reality when the metal genre would truly take off, but the big stumbling brontosaurus that was Toni Iommi’s guitar work could not have existed without acts like AC/DC. AC/DC’s big contribution was their fearlessness in experimenting with extremity. There was no such thing as too loud, no such thing as too raucous or obnoxious or vulgar. This is the band that recorded the song Big Balls, after all. Incidentally, Big Balls was the first song I learned to play all the way through on guitar.

Things would get harder after that, of course. The metal genre, with its insatiable hunger for boundary-breaking, would proceed from the primitive heavy metal of Black Sabbath through thrash, death, and black metal, before finally burning out in post-black and blackgaze. And hard rock would follow its own course into hair metal and then grunge. But AC/DC was one of the first bands to realize that you can make almost any chord sound cool just by cranking the gain high enough on that big tube stack.

There is a reason why AC/DC is immortal. That first impression never dies. The mark they made on rock and roll, along with some of the immortal rockers such as Highway To Hell and Thunderstruck, have made them permanently contemporary. The original band members are old men now, but that doesn’t stop today’s youth from going around in AC/DC rock t shirts.

The Magic Of The Misfits

Who They Were, And Why It Matters

The original Misfits were a raw, raucous punk rock outfit with transgressive lyrics and an underground sound. The modern ear, accustomed to polished production with compression and precise EQing, reacts strongly against the gritty underproduced sound of 1980s punk rock. But there is a certain charm to the Misfits that is easily missed if you don’t listen closely. There’s more to the Misfits than misplaced nostalgia by old punk rockers who were there for their 80s shows. And if you’re willing to dive in, you might experience some of that magic for yourself. There’s a reason why rock t shirts so often feature the Misfits logo, even though the Misfits are less well-known than Danzig’s solo career. 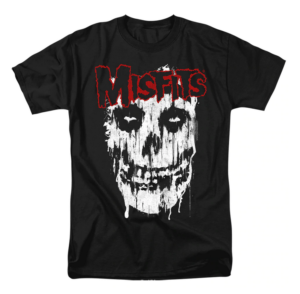 A rock t shirt bearing the Misfits skull and logo

The reason for this is that the Misfits, while relatively unknown to the listening public, are often listened to and deeply respected by artists themselves. How many people have heard Metallica’s cover of the Misfits’ “Die, Die, Die My Darling” without knowing who the original artist was? Some of the most famous rockers are deeply influenced by the Misfits, even if the Misfits themselves never had breakout popularity. There is a distinct pattern in rock music where an obscure but very well-reviewed artist has a strong influence on subsequent artists who reach much greater heights of popularity. The Misfits are one case of this.

For example, try listening to the song Halloween. The tune is immensely catchy, and the production isn’t bad either. The lyrics are the sort of thing that made old ladies clutch pearls back in the 1980s. Its remake, Halloween II, contains the same chorus with a slower tempo. In both cases, we can see what makes rock musicians love the Misfits. There’s a je ne sais quoi, some quality underlying Danzig’s singing-in-a-can and the buzzing guitars and poppy choruses, that is like nothing else ever recorded. It’s catchy and poppish, but also edgy and abrasive. It’s hard, but also upbeat. It’s the product of a kid in the 80s dreaming of rock stardom but who is too uncompromising to clean up his act and sing a sappy love ballad.

This quality is subtle. It takes some time to hear it. You have to sit with the music for a while. That’s why a lot of people pass over the Misfits for more famous acts; it’s music for musicians more than anything else. When you see the Misfits logo, it’s usually on a rock t shirt or bass drum or guitar, or someone’s guitar case or gig bag, or as a sticker on someone’s amplifier. The people who tote Misfits swag are nearly always musicians, because that’s who is in-the-know enough to understand and respect their music. 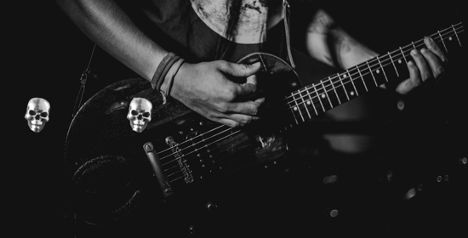 AC/DC has recently partnered with the Australian jewelry brand Heart of Bone. The new collection fuses advanced biomolecular microscopy technology with traditional craftsmanship to high a high-voltage unisex luxury accessories collection. Take your style to the next level by investing in one of their signature pieces. From a limited-edition 9k solid gold collectors’ ring to a bespoke sterling silver tribute ring, in three distinct styles to choose from. Or opt for a pair of sick-looking stud earrings. More affordable but without compromising on the AC/DC rock look appeal. Pair with your favorite band t-shirt for the ultimate 2021 raver look. 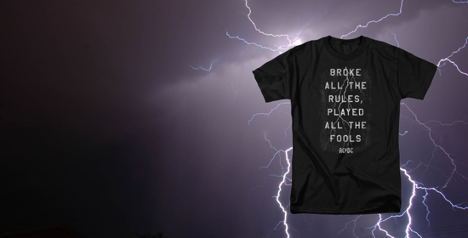 No AC/DC fan worth their weight in salt can call themselves a fan without this bad boy in their wardrobe. When it comes to classic rock band t-shirts for young rebels or teen rockers, you can’t go wrong with a pair of black skinny jeans and this signature t-shirt. Inspired by the 1990s hit Thunderstruck, the song’s inspiration was taken from the urban legend of how Angus’ plane was hit by lightning. Written by guitarists and brothers Angus and Malcolm, the plane almost crashed when it flew through a thunderstorm. So if you need a reminder of why you should always live life to the full…well here it is! 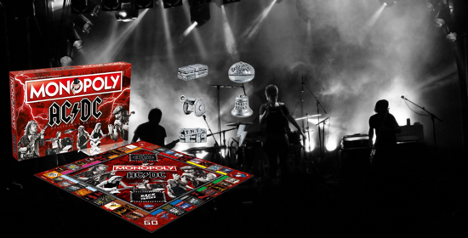 We’re all frustrated being at home due to the global pandemic, but there are always board games to keep you entertained. Check out the AC/DC Monopoly edition! Tokens have been exchanged for dynamite, lightning bolts, and even an Angus’ Hat. Watch out for the recording studio fees, concert ticket expenses, and head to the Highway to Hell to reap the rewards. Invest in gold records and trade your way to fame and fortune. Throw on your favorite classic rock band t-shirt and let the games begin! 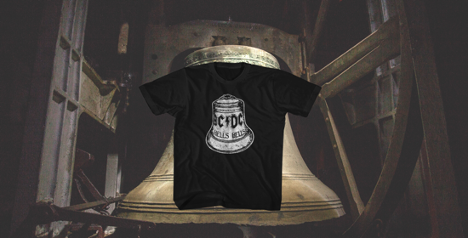 The perfect partner in crime, rock this classic and understated rock band t-shirt and pair it with your favorite hoodie. Hells Bells was written as a tribute to lead singer Bon Scott, and features his replacement, Brain Johnson. The band actually commissioned a one-ton bronze bell in order to achieve the acoustics they wanted for this memorial piece. If you’re a massive rock band AC/DC fan, wear this tribute t-shirt and remember the incredible talent of rock legend Bon Scott. 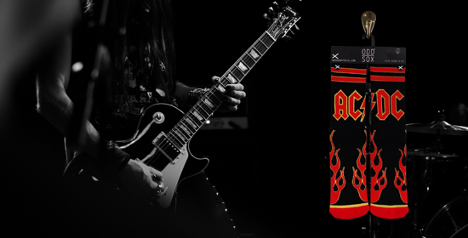 Pair a classic kids rock band t-shirt with skinny jeans and these striking fire and flame socks. Don’t conform to a standard pair of white ankle socks, when you can rock these AC/DC-inspired knee highs. Made from 100% cotton, if you have a fierce sense of style, pick up a pair today and add a dramatic accessory to your rebellious wardrobe.

Explore this online collection of classic rock t shirts and accessories and express your appreciation for the legends that brought us hit tracks such as Highway to Hell, Thunderstruck, Moneytalks.