One of the interesting things about popular culture is that popular culture eventually just becomes culture. What starts off as a joke or a meme or a tv gag eventually finds its way into the common language. Many pop culture phenomena are ephemeral and eventually fade away. Today’s flavor of the week pop song fades away after a few months and that’s that. Maybe it gets a snippet of air play here and there. But some pop cultural phenomena endure and take on a life of their own, living far beyond the bands, franchises, and brands that gave them life. 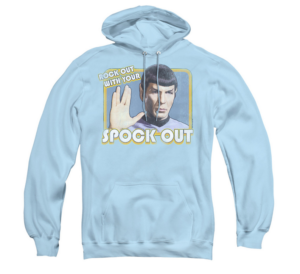 One of those pop cultural phenomena is the Vulcan salute. Go find a teenager who has never seen Star Trek and ask them if they recognize the hand sign with “Live long and prosper”. I’ll bet you anything that they do. That’s because Star Trek was such a good show that it wound up giving birth to many pop cultural phenomena that made it over the gap and became permanently part of our culture. One of the big contributions to the cultural lexicon from Star Trek is the Vulcan salute, a hand signal typically accompanies by the words “Live long and prosper.” You’ll see this gesture and its accompanying phrase on Star Trek t shirts.

Believe it or not, the Vulcan salute was not created by the show’s writers. The writers of Star Trek did not conceive of the gesture, nor the words. Leonard Nimoy himself invented the gesture and put the words to it. Leonard Nimoy is Jewish and he based the gesture on something he saw Orthodox Rabbis doing when visiting an Orthodox synagogue as a child. He saw that they made a gesture where the ring and middle fingers were separated and the thumbs extended, and that they used this gesture when placing their hands on something to bless it. The hand position mimics the Hebrew letter “shin” which is short for one of the names of God in Hebrew. Nimoy created this gesture when he decided that the Vulcans were a race for whom the hand was very important.