It has been a decade and a half since the release of 300. Released in 2006, the film was a blockbuster. Grossing over four hundred million dollars, the film was praised for its style, unique color palette, quotable dialogue, and over-the-top action and gore. Although the film was released fifteen years ago, people still quote it today and wear 300 t shirts. So I have to ask myself: what made 300 so good? Why is that movie a classic? 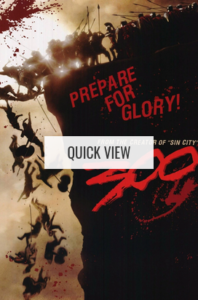 A little background on me. I first saw this movie in 2006, when I was a teenager. I went to the theater in my small town with a friend and we sat in the back, ate some popcorn, and watched. I remember when, coming out of the theater, my friend was so pumped about it. He stood on the street corner and said, “Where do you guys wanna go eat? Because I was thinking that tonight, we could dine in hell!” He screamed that last part. I’m not the pubescent video-game-playing Red Bull-swilling kid I was then, but I vividly remember seeing 300 in the theater that night. It’s an experience I can’t forget.

A few things. First, the movie is all about style more than substance. Or, to put a finer point on it, it’s style-as-substance. Who cares if it’s historically accurate or implausible? The point is the style. The whole movie is shot in a weird color scheme to make it look like a comic book, and this reinforces the surreal, mythological view of the whole thing. It doesn’t feel realistic. It doesn’t feel like real life at all. But it’s not supposed to! The whole point of 300 is to feel like some strange dream, the kind you have when you’ve got a high fever and just had a lot of cough syrup before bed. Everything in 300 is over the top and cartoonish, and that’s what makes it so delightfully archetypal.

The second aspect of 300 that makes it immortal (but not like a Persian Immortal!) is its quotability. Say any of the following to someone:

“Tonight, we dine in Hell!”
“Spartans, prepare for glory!”
“Madness? THIS IS SPARTA!”

Everyone knows those quotes. Everyone! Even people who have never seen the movie because they weren’t born when it came out know those quotes. They’re all over t shirts and memes and everything else. The quotable dialogue and unique style together make 300 an unforgettable film. Nobody can forget the over-the-top getup worn by Xerxes when he makes his first appearance, nor the sheer violence and gore. Add the agelessly quotable lines of dialogue ot that and you’ve got yourself a winner.